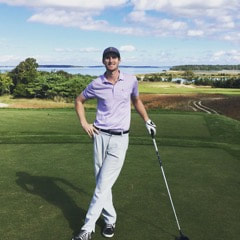 ​With a love for the game of golf, Oakville’s Zack Creed has taken his passion for the links into every facet of his professional life. From course management to teaching and playing, he has spent the better part of the past ten years devoted to the game. In that time he has played and worked with some of the best golf clubs in the United States.


Zack Creed’s most fulfilling role of playing and teaching was fostered while living in Indiana. He worked first as an Assistant Golf Professional at Crooked Stick Golf Club in Carmel from 2009 to 2012. During his tenure there, Zack served as a Tournament Liaison for the U.S. Senior Open Championship in 2011 and for the 2012 BMW Championship as part of the FedEx Cup playoffs. Additionally, he organized an Advanced Junior Golf Program for amateur golfers.


Zack Creed later took a position at The Hawthorns Golf & Country Club in Fishers, Indiana from 2012 to 2013. While with that club, he took on the responsibility of the Director/Head Pro for a period of four months. He played in the 2012 and 2013 Indiana Open tournaments and was a finalist for Indiana Professional of the Year in 2014 after leaving Hawthorns for a role as co-first assistant professional at Highland Golf & Country Club in Indianapolis.


Expanding from the playing and teaching sides of golf, Zack Creed moved on to selling and marketing new golf products to the U.S. market with Midas Event Supply in Ontario, California, from 2015-2017, where he served as a trade show representative to Club Managers. He was also in charge of evaluating the Midas expansion into the Canadian market.


Zack received an education in Professional Golf Management (PGM) and recreation management (BSc) from The University of Nevada Las Vegas. He was named 2009 Player of the Year and he undertook PGA internships at La Costa Resort in Carlsbad, CA, Grayhawk Golf Club in Scottsdale, AZ, N.J. National Golf Club in Somerset, NJ and Crooked Stick Golf Club in Carmel, IN.


Zack Creed has volunteered at numerous PGA tournaments throughout his career, including for Par for the Cure, a set of event initiatives raising funds for breast cancer research.


He originally entered the PGA of America in 2010 and is currently a member of the South Florida section.